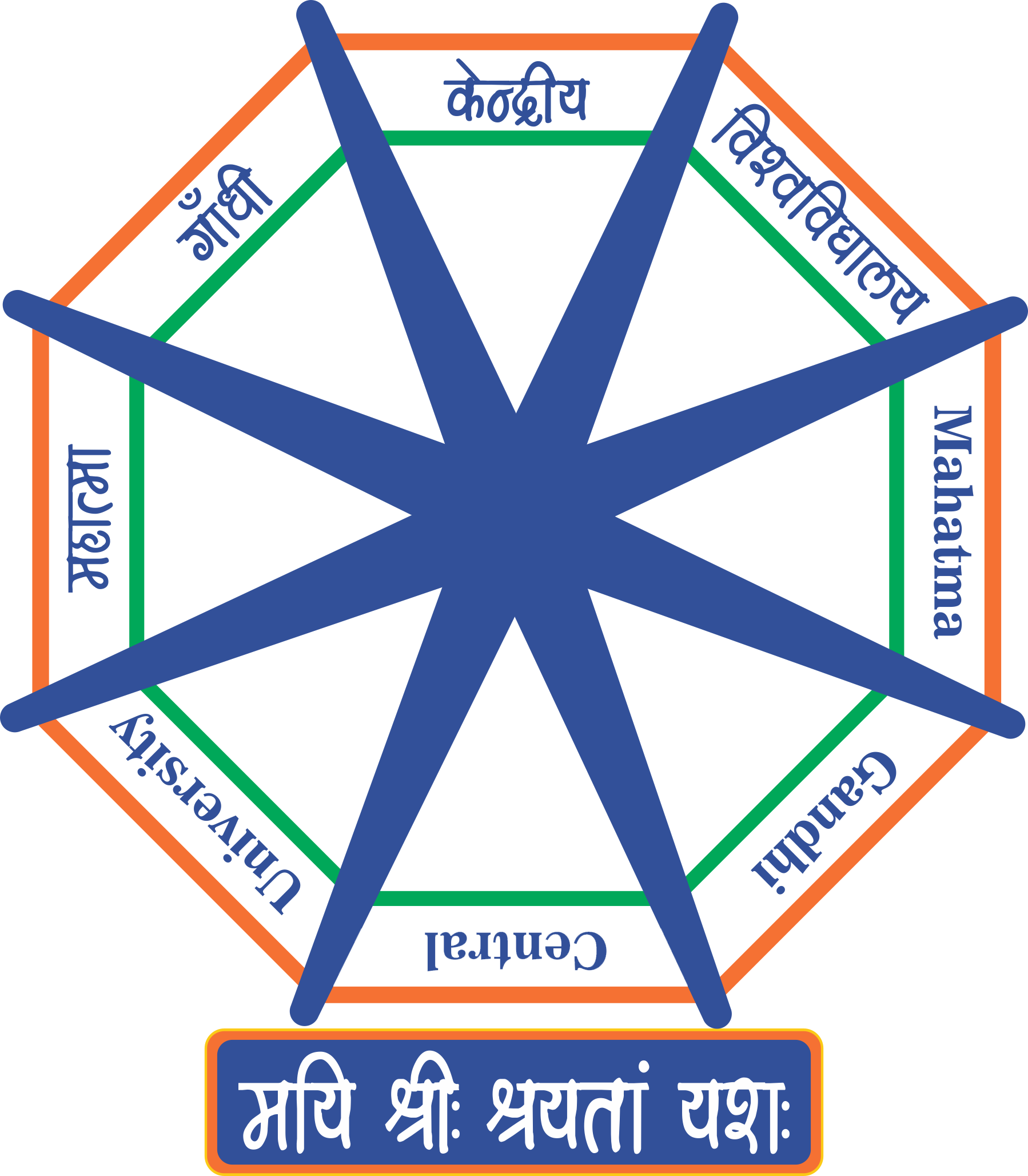 The Logo of MGCUB is a combination of
(1) Charkha

and
(2) Moto of the name of Mahatma Gandhi Central University, Bihar written as,

The concept behind the Logo of Mahatma Gandhi Central University, Bihar (MGCUB) is derived from the Charkha, an iconic symbol representing Mahatma Gandhi. The Charkha is wrapping tricolor yarn spun by its dynamic activities symbolizing our national flag making it a University of national importance. Charka (form of wheel) is a symbolic representation for the progress and growth. The spinning wheel has been used metaphorically to signify transformation of raw material into a productive material that fabricates our society. This represents the national unity, dynamism and overall progress.

The color of Charkha is depicted in indigo blue connoting the first public movement against colonial rule by Mahatma Gandhi, the Champaran movement (Indigo Movement) one of the significant event of the region. The foundation year of the University marks centenary of this famous Champaran Movement. The design is an abstraction of the Charkha and the national movement.

In addition to the above concepts the design also represents the glowing/shinning sun/star in the middle. Sun is the source of energy connoting to the source of knowledge. Charkha is shown with eight spokes denoting spreading of knowledge and wisdom in all eight directions adding to the slogan of the University. In summary, the Logo features the concept of:

Eight is a very important number in Indian tradition. It is believed that there is a group of eight deities, Asta Dikpala

The Dharmacakra, a Buddhist symbol, has eight spokes. Buddha's principal teaching - the Four Noble Truths - ramifies as the Noble Eightfold Path and Buddha has emphasized upon the importance of the eight attainments.

In Christian religion, Peter 3:20 states that there were eight people on Noah's Ark.

"Which sometime were disobedient, when once the longsuffering of God waited in the days of Noah, while the ark was a preparing, wherein few, that is, eight souls were saved by water." (Bible, King James Version, 1. Peter: 20)

The Beatitudes are 8 blessings recounted in the Sermon on the Mount in the Gospel of Matthew. (Matthew 5:1-12)

Sukhmani Sahib is part of Shri Granth Sahib and was compiled by the fifth Sikh Guru, Guru Shri Arjan Dev Ji. It has exactly 192 hymns with 24 (divisible by 8) sections. Group of 8 hymns are known as Ashtpadi in Sikhism. Ashtpadi, literally 8 steps is a music composition with 8 lines. It is considered rhyme of love and supreme devotion.

In Jainism, the number of Tirthankars is 24 (a multiple of 8) and Jain Karma theory classifies karmas into 8 types. (Jaini, Padmanabh S. , The Jaina Path of Purification, Delhi: Motilal Banarsidass, 1998)

The moto of MGCU has an inspiring and motivating Motto, quoted from the Shri Sukta of the Rig-Veda and it means- ‘I be blessed with prosperity, name and fame’. Prosperity is not limited only to the acquisition of wealth and property but it encompasses the overall human development, which is indeed the primary responsibility of any University. In a knowledge society, prosperity cannot be had without knowledge and without prosperity it is futile to yearn for name and fame.